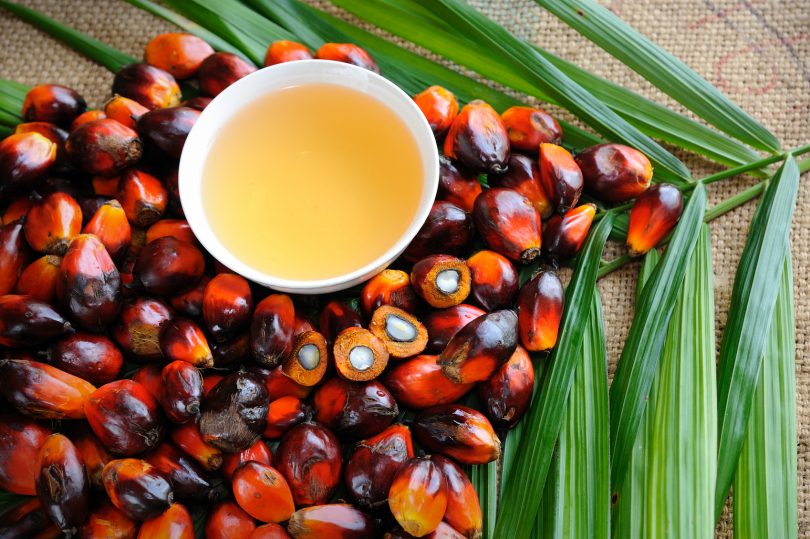 Very few of us wake up bright eyed and bushy tailed, so we have creams and powders for that. We may pay premium prices in order to obtain our “look,” but there is an even higher price associated with the cosmetics we consume. Over 70% of the beauty products on the market have some form of palm oil, palm kernel oil, or palm oil derivatives in them. It is most often used in moisturizers, conditioners, and lipsticks. Palm oil is derived from the fruit of oil palms, which grow in tropical climates. Palm oil has been hailed as a miracle vegetable oil because it’s stable, dynamic, and cheap to produce. However, the high demand for palm oil has led to environmental destruction, endangering biodiversity, and human rights violations. Palm oil produced under these circumstances is known as conflict palm oil.

Nyanza-Lac, Burundi – December 31, 2010: A group of people is working in a palm oil production, a lot of smoking barrels in which the palm fruits are cooked. This palm oil production is near the town Nyanza-Lac in south-western Burundi at the shores of Lake Tanganyika.

Palm oil has a high yield relative to amount of space required, which makes it one of the most economical oil producing plants. However, because it yields so much and has such a high demand, there is the continuous practice of razing rainforests to expand palm plantations. Palm oil production occurs in the tropical areas of Southeast Asia, Africa, and South America. Indonesia is the largest palm oil producer in the world. Over 80% of Indonesia’s rainforests have been cut down for plantations and a continued loss of about 6.2 million acres each year. As a result, the carbon emissions from deforestation are so high that Indonesia is the third largest carbon producer in the world next to China and the United States.

As tropical deforestation continues, the rate of rainfall around the world will be affected. Studies show that deforestation in Southeast Asia will increase rain in Southern Europe and the Arabian Peninsula, while deforestation in Africa and South America will reduce rainfall in the Midwestern United States and northeast China, respectively. The increase or decrease in rainfall can impact crop production, draughts, and possibly famines.

Palm oil driven deforestation also has dire consequences for biodiversity. Plantations are pushing wildlife to the edges of their habitats and threatening food sources. Orangutans, the Sumatran and Borneo elephants, Sumatran rhino, and several other species are on the brink of extinction. Some of these animal species, such as the Sumatran tiger, could become extinct within a few decades if significant steps aren’t taken to protect their habitats.

Indigenous populations face intimidation, violence, and displacement at the hand of large corporations wanting to clear forested land for palm oil plantations. Many farms run on forced labor from immigrants smuggled into the country from other economically depressed areas. Some of the labor relies on children who must work because of poverty. Indigenous people that are forced off of their land are subject to crippling poverty as resources to help them are few and far between. As it stands now, there are limited government initiatives in place to protect the rights of indigenous peoples affected by palm oil plantations.

The Roundtable on Sustainable Palm Oil (RSPO) is a collective effort between corporations and NGOS to make palm oil production safer and sustainable and to limit conflict palm oil. RSPO outlines specific criteria that makes palm oil Certified Sustainable Palm Oil (CSPO). The values of RSPO attack the causes of deforestation, human rights violations, and endangered wildlife by demanding that all palm oil development from certified producers does not clear new land, encroach on the territory of endangered species, or tramples the rights of indigenous people.

The Avon Palm Oil Promise  outlines the company’s Responsible Palm Oil Principles after it started purchasing its palm oil derived products from sustainable farms. Avon also joined the RSPO and participates in the GreenPalm initiative, where sustainable oil is bought at a premium.

P&G has created and published their own palm oil use criteria. By 2020, they hope to ensure that no deforestation occurs within the palm oil supply chain, and their partnered producers were required to submit their plans for accomplishing this by the start of 2016.

A part of their goal to achieve their Responsible Oil goal is to create supply chain transparency to ensure consumers that their palm oil is ethically sourced. J&J also work with several NGOs to improve the sustainability practices of smaller palm oil farms.

Estee Lauder maintains a “no deforestation policy” that forbids their palm oil suppliers from clearing new land or developing farms in crucial rainforest ecosystems. They are also a member of the RSPO and buy from GreenPalm suppliers as well.

Limiting the consumption of palm-oil products will also affect the demand for it within the cosmetic industry. There are companies that are committed to being palm oil free.

LUSH began removing palm oil from all of their products in 2008 and are currently striving to produce 100% palm oil-free products. The first offering came small and naked and was called the Jungle Bar. That little soap, developed for LUSH’s campaign to “wash your hands of palm oil”, managed to raise $34,000 for the Rainforest Alliance; as a result, every soap they make is now palm oil free. They may not always use what I would term the most responsible ingredients, but they have proven, time and time again, a strong commitment to the environment, and an unwavering dedication to animals.

Axiology is a lipstick company that was created specially to produce cruelty free, sustainable and environmentally friendly make up. Additionally, the company also donates to the Orangutan Foundation International (OFI) in efforts to help protect the endangered species from the effects of palm oil farming.

The next time you reach for some lotion or your favorite shade of lipstick, think about where it all begins and the real cost of beauty.