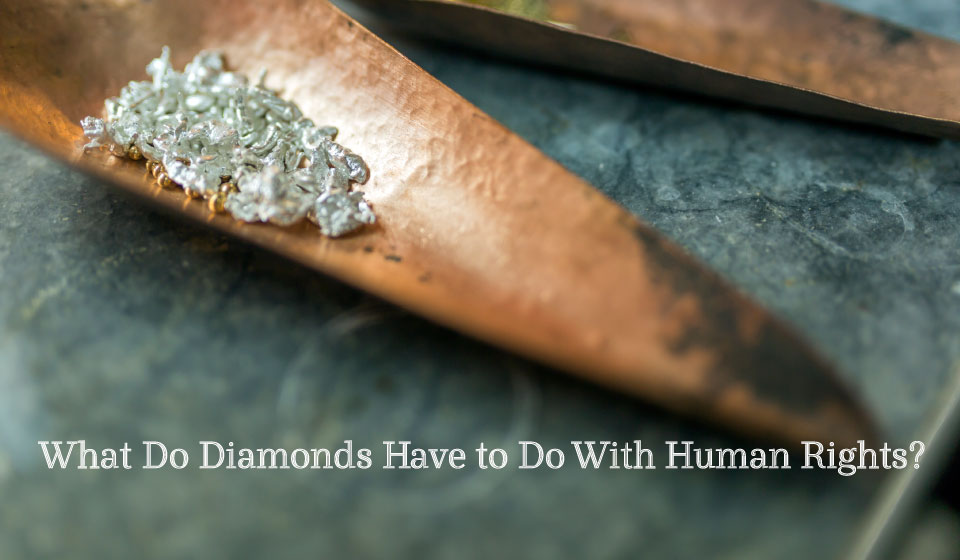 They say a diamond is a girl’s best friend, but what they don’t say could leave many women questioning our engagement tradition.  Diamonds were first discovered in South Africa in the late 1800s and became the most popular choice for engagement rings in the 1940s. The impact of the diamond business over the last 200+ years has left us scratching our heads as to why we choose to continue to fuel the demand for this non-renewable natural resource.

When we look at the diamond industry from a global economics perspective, we learn that 65% of our diamond supply comes from Africa, and that African diamond exports is an $8 Billion business. The ability of several African countries to generate that kind of wealth to support their nation is an incredible opportunity for their citizens. But, when we look at the social and environmental impacts, we see widespread environmental destruction and degradation, and social atrocities that can never be repaired.

Also referred to as “blood diamonds,” conflict diamonds are those used to finance anti-government military action. The proceeds from the sale of these diamonds finance rebel movement against recognized governments and have been a massive source of violence and civil wars. According to Brilliant Earth, who put together a very informative infographic you can see here, diamond wars have caused 3.7 million deaths in the last 15 years. Compare that to the number of TOTAL US military deaths since 1775 combined – 1.3 million. You can clearly see the greed and abuse of power funded by our engagement traditions.

Roughly 15% of diamonds on the market come from artisanal miners, not large suppliers. In Africa alone, there are over one million of these artisans – often a single person and his family, who goes out digging and scouring for diamonds. These independent miners live in extreme poverty, often earning no more than $1 per day. This group faces a higher risk of cave-ins and health issues as their working conditions are not regulated. Unlicensed artisan miners are further victims of human rights abuse as they can be raped, tortured, and beaten to sell their diamonds to suppliers for next to nothing. In one report from 2011, the Zimbabwean army was caught running secret torture camps to extract diamonds from these independents.

As if that wasn’t enough, the further exploitation of children in this get-rich-greed-scheme is horrendous. Many children are forced to leave school early to help their families. In some countries – like Angola – it has been reported that up to 46% of diamond mine workers are children. This is unacceptable.

The Diamond Business Can Be Dehumanizing and Dangerous

Not only is the diamond mining business dehumanizing and dangerous, it’s unethical and goes against everything we stand for in civil society.

Are there conflict-free diamonds?

Are there ethically sourced diamonds?

With the consumer backlash against these issues in the 1990’s, 81 national governments got together to form the Kimberly Process Certification (in 2003) to prevent conflict diamonds from entering the global supply. Its goal was to evaluate conditions in diamond producing countries and certify that their exports were clean. The Kimberly Process, in the end, was a savvy marketing strategy on behalf of diamond-producing countries to quiet the consumer outrage, but has completely failed at ensuring diamonds aren’t wrought with injustice.

The Kimberly Process has been ineffective – at best – due to smuggling and corruption, and a certification process that has never required diamonds to be traced back to their mine of origin. Over $2 Billion in diamonds have been reported stolen by political allies of corrupt governments just since 2008. Further, the evaluation criteria put in place by the Kimberly Process currently allows diamonds to be sold with conflict free status from every country except one: the Central African Republic. The Kimberly Process has been so ineffective at monitoring and solving these human rights issues, that many countries that helped form it have exited and distanced themselves from being associated with it.

So what do we do?

Let’s refuse to fund civil wars and human rights atrocities by being conscious about the jewelry we buy and gift to our loved ones.

Here at Socially Conscious Brands, we have two suppliers we can stand behind.

Murad and Natalia Osmann – the Instagram phenomenon who created the Follow Me To series, had a fairytale love story and wedding in 2015. Their search for a conflict free diamond led to the creation of their jewelry business – Follow Your Love. Osmann has created a lab grown diamond that is 100% real and identical chemically, physically, optically, and structurally.

Co-founded by Beth Gerstein and Eric Grossberg, both from Stanford, Brilliant Earth has been a leader in educating consumers about the footprint of diamonds. Brilliant Earth guarantees their diamonds are ethically-sourced – even beyond the Kimberly Process and beyond conflict free. They guarantee their diamonds do not finance civil wars, that they’re free of human rights abuses, use fair labor practices, and are mined in an environmentally responsible way. Brilliant Earth also offers lab created diamonds and recycled diamonds as eco-friendly alternatives.

When it comes to a girl’s best friend … there’s something inside me that says … I don’t want that blood on my hands!

Rachel Cogar Yeakley is a socially conscious consumer, researcher, and writer. She writes about companies that are good to our planet, good to their people, and support local and global causes. Rachel believes in being a global citizen and a steward of our earth ... and helping our brothers and sisters in our own communities and around the globe. She has an extensive background in marketing and business consulting, and has dedicated her energy to making a difference in our world through education about social consciousness.