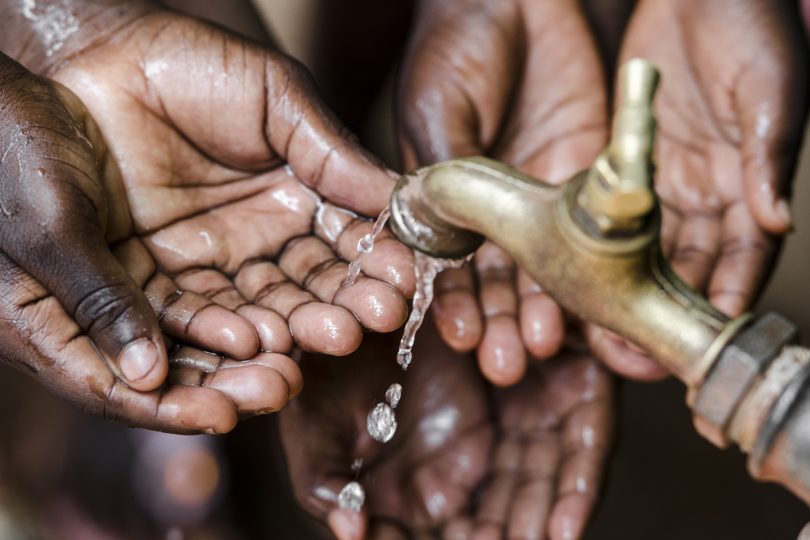 With abundant water in rivers, streams, and lakes, it seems that our needs will always be met. But many of us live in a phenomenal bubble of plenty. Make no mistake, the world is in the midst of a clean water scarcity crisis. There is a global shortage of fresh water and even less clean water. Humans are mostly made up of water and, along with the rest of the animal kingdom, need it to survive. Without it, we cannot grow food, raise livestock, develop sanitation, and so much more. Everything depends on water and it is running out.

Seventy percent of the Earth’s surface is water. Freshwater only makes up 2.5% of surface water on the planet. Of that small percentage, only 1% of it is readily accessible. The Great Lakes account for 95% of the freshwater in the United States and 1/5th of freshwater on earth. The remaining freshwater is frozen in glaciers and tundra. The amount of freshwater on Earth has remained the same for millenniums.

However, now we are at a crossroad, where the amount of fresh water on Earth is less than what the world’s population needs. The way that freshwater is used (and abused) currently, in combination with a booming population, suggests that there is a possibility that we may come to live in a world with very little fresh, potable water. If this fate is to come to fruition, there will be absolute chaos.

One Billion People Without Clean Water

One billion people without clean potable water is not a prediction—it’s reality. Eleven percent (11%) of the global population does not have access to potable, unpolluted water. About 2.7 billion people have experienced water scarcity at least one month out of the year and 783 million people do not have clean water. An additional two and a half (2.5) billion people do not have proper sanitation facilities. Eighty five percent (85%) of the population lives in the driest environments on the planet, where water is scarce and potential is limited. With seven (7) billion people on this planet, we already require 1.6 Earth’s worth of resources to sustain ourselves. Our resources are stretched, overburdened, and overused. Our water resources are scarce as aquifers around the world are being pumped faster than the rain can replenish them.

Lack of proper sanitation plays a special role in the clean water crisis because it is the leading cause of water pollution in the world. Water-borne bacteria and illnesses are also the largest cause of death worldwide, claiming more victims than war each year. It is one of the leading causes of death in children under the age of five, with approximately 760,000 child deaths each year. The World Health Organization estimates that water and sanitation-related illness could kill 135 million people by 2020.

When Our Water Becomes Diseased

Dumping of raw sewage would not be such a dire threat to our waters if it weren’t for the fact that our waste carries disease. Traces of medications and hormones are present in our waste and these find their way into our ecosystems. Viruses such as typhoid, cholera, and hepatitis can also be spread through sewage. When there is seven (7) billion people’s worth of sewage on the planet, there are only so many places it can go and only so quickly that the environment can break it down before those things contaminate our fresh water. Additionally, industrial waste water is another pollutant damaging our water supply. Five to ten (5-10) billion tons of untreated industrial waste is discharged into rivers and oceans.

All of this pollution comes back in the water we drink. The Ganges River in India is just one example of waste dumping in a freshwater river. This one river supplies water to 500 million people. However, the water is toxic due to the amount of sewage and wastewater that is dumped into it each year. This river has been shown to spread dysentery, cholera, and hepatitis among other illnesses. Severe diarrhea, believed to be caused by the Ganges, is a leading cause of death for children living alongside it.

People washing and working beside the Ganges River in India – Bibek2

The Ganges is just one example of how poor sanitation and sewage management can corrupt water resources. Pollution is certainly not a developing world or an “over there” problem. All freshwater is vulnerable. Scientists and environmental authorities have been fighting pollution in the Great Lakes for decades. In 1969, a river that flows into Lake Erie caught fire because of all the pollutants.

Soon, the effects of water scarcity and a clean water crisis will affect: our ability to grow food, female education, and poverty.

It can generally be assumed that food production uses a decent amount of water. Water is needed for livestock, irrigation, and other processes related to food production. In fact, food production accounts for 2/3 of water usage. In the United States, 80% of water used is just for the agricultural industry.  A quarter pound of beef requires about 460 gallons of water to produce. That is the sum total of growing feed for cows, the care of the cow (washing, feeding, water, etc.), slaughter and processing.

You may not think there is a strong relationship between clean water and women’s education, but there is. The presence of clean water, or the lack of it, has an influence on whether girls can receive an education or not.

First, when water is scarce, people must go outside of their immediate area to gather water. For many communities in the world, like those in sub-Saharan Africa, some people must walk up to 20 miles every day to fetch water. This task is usually carried out by women and girls. Because water is necessary for cooking, subsistence farming, and sanitation, these families cannot do without it. This means that girls gathering water cannot go to school. Studies have shown that countries with low female literacy rates have slower economic growth.

Loss of educational opportunities for girls is just one result of water gathering. Women who must gather water lose out on opportunities to work or conduct business. Forty (40) billion hours per year are collectively spent looking for water in just Sub-Saharan Africa alone. Loss of labor hours and education for women will ultimately affect the economic potential and growth for communities around the globe—all because of the water crisis. Economies will also feel the strain of water scarcity when there isn’t enough water for farming or industry and workers are ill from poor sanitation.

Conserving Water is a Worldwide Effort

Those of us living in water-rich countries have a responsibility to the rest of the world. We must do what we can to conserve the most precious of resources. The clean water equation is imbalanced. We need more water than there is for us to readily use. Conservation and protection of our freshwater supply must be legislated and enforced by governments. Innovations in how water is used in industries should also be rewarded to incentivize further development and research in the private sector.

Several projects to change how we use water have already come to fruition. 2030 Water Resources Group offers a catalog of solutions for ways to conserve and protect clean, fresh water. The textile industry uses large quantities of water and dyes pollute the water and must be subject to aggressive and costly treatments before it can be discharged.

Today is the Day

Individuals can contribute to preserving our water resources by eating less meat, keeping trash out of our toilets (i.e. cigarettes, candy wrappers, etc.), water-saving shower heads, and turning off the faucet when you don’t actually need running water.

It is not too late to change our habits, be mindful, and protect our waters for the many generations to come. We all just have to do our part.